Dear John
Thank you.
Whilst writing I attach another image which I currently believe to be Amelia Harlow nee Wyatt 1783-1853, wife of Robert Harlow 1779-1828.
Its an ambrotype. She died in 1853 aged 70. Ambrotypes first appeared in the early 1850s so she was just in time to have an image done aged say 67-70. This woman does look that age.
Ambrotypes rarely have any clue to photographer/studio unless a label is inside the case, the side holding the image, in this case none.
She also does not fit any other person of the period I am likely to have inherited via my Ashbourne/Barnes roots.The image came to me also with an image of Thomas Barnes (her son in law) and the silhouettes.
A better image will be available for your files when firmer conclusions are reached. 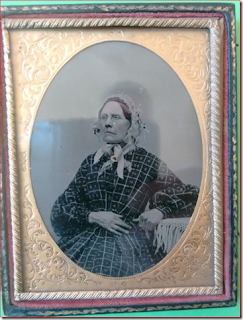 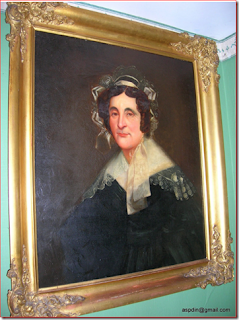 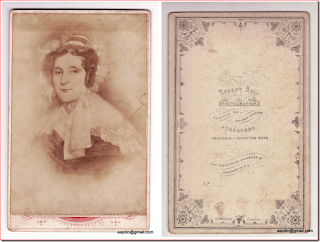 Regards
Nigel
For details regarding Robert Bull please see:
Derbyshire Photographers' Profiles, by Brett Payne
from which the following details are an extract courtesy of Brett Payne author of that site: Robert Bull was born c. 1839 at Ashbourne, Derbyshire, the third of six children (and eldest son) of Robert Fletcher Bull senior (c. 1807-1886) and his wife Helen (c. 1811-1857), a joiner, cabinet maker and builder from nearby Compton. As a young man he followed his father - and grandfather before him - into the carpentry trade, and was listed with his younger brother Henry as a "joiner & cabinet maker" in the April 1871 Census. By 1874 however, when Wright's trade directory gave the listing, "Bull Rt. joiner and bldr, and newsagt, Sturston rd. Ashbourne", they had obviously opened up a shop. Adamson (1997) shows Robert Bull, presumably Robert junior, working from premises in Sturston road from 1876 to 1878, so he seems to have started the photographic sideline in 1876.
-----Original Message-----